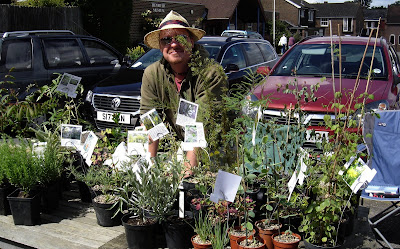 Well, here I am, in case anyone was wondering what I look like (the shades and hat don't help do they?), or indeed, whether I exist at all.
I've been preparing for this for weeks, getting the laminated labels ready, potting things up so they'd look their best.
It was a gorgeous morning and everything looked very nice but I only took £40 in the whole day (and then went and spent half of that on croissants, fresh fish and smoked meat from the other stall holders). None of the others did much better. Neil Johnson of Stonepit nurseries, who has taken over organising the market is doing his best to liven things up but has his work cut out.
The problem seems to be a lack of passing trade since we're hidden away at the far end of the municipal car park behind Budgens. To be fair, there's little room actually in the high street itself for stalls - the pavements and the road itself are mostly quite narrow but I have the feeling that, as usual, it's more about political will and vested interests. There is a prime leafy shady space right in the centre of town in front of a bank and a dry-cleaning shop but the owners (allegedly) won't hear of it being used. Why not? In any other town in Europe that space would be full of chairs and tables, people chatting and eating and generally having a nice time. What is wrong with us? Another possible spot is where the road is wider toward the south end of town (toward Golden Square and The Common).
Other towns requisition parking spaces and forecourts along the high street on market days and everybody benefits. I realise there is not enough space for the entire market to be accomodated this way but a few stalls here and there would make it obvious to passing traffic when something was going on and draw the public through side passages to stalls in the car parks and other spaces behind the shops.
Anyway, I think we can do better than this.
Posted by Steve Law 1 comment: