Season of fruits and mellow mistfulness 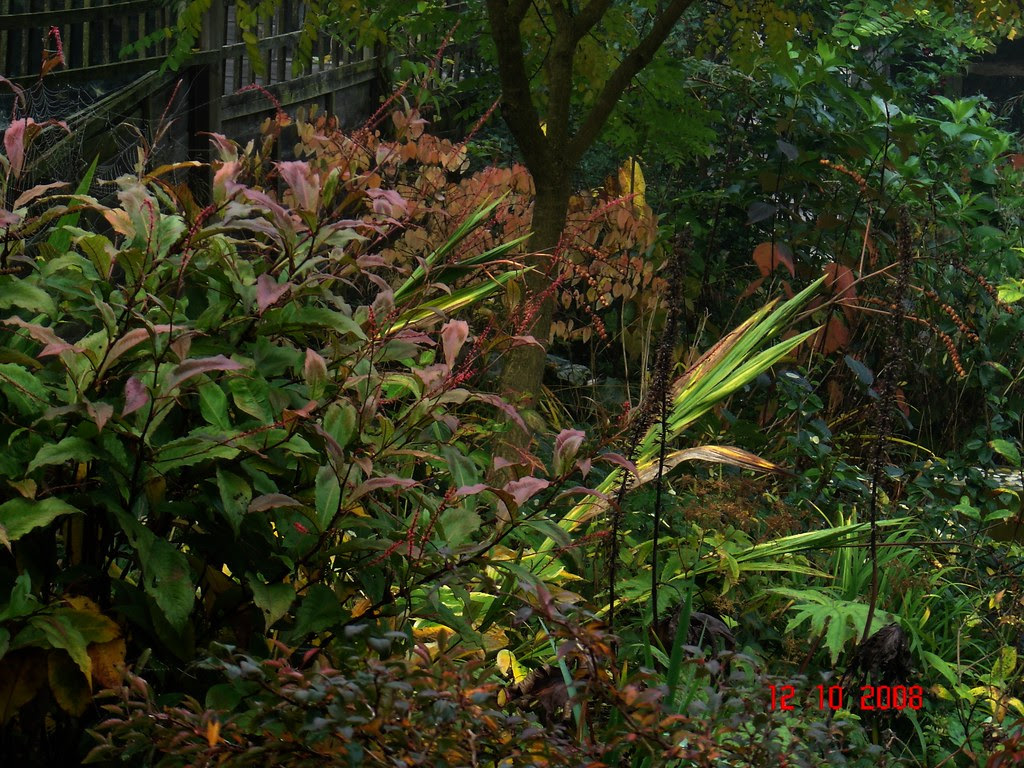 I surprised myself this morning, strolling into town (to the dentist as it happens). It was wet and overcast and the leaves were really beginning to turn and fall, and I thought to myself what a relief it was that the summer was over. That's what surprised me. Normally I love the warm weather and tend to get a little depressed when it's over, but no, today I was positively buoyant.

The summer has been 'disappointing' they say, but then they say that every year. Normally I'd disagree but this year... What's it been? It's not been the rain - we've had something of a drought. Things have been looking quite sorry for themselves. Maybe it's been the sun. It's been dry, but it hasn't been bright, which is an unsatisfying state of affairs. This carried on until early October, by which time I was heartily sick of it. The cold and wet came as a welcome reprieve.

Actually I've known for a while I have a problem with August - memories of wet camping holidays as a child I expect. August is a con. It's not summer.  August is the overture to autumn (as February is the overture to spring). You can feel it in the air. May and June are summer. I noted this year that things started to go off soon after the solstice. You might have noticed if you've been keeping up with the Emma's Garden photoset on Flickr that there's a lot fewer pictures from July to September than for other times. There's just nothing photogenic going on (unless you're into macro when you can look at the flowers in isolation and ignore the total ho-humness of everything around them.)

So now I look around at the garden and am once again filled with energy. Finally I can do something. As you'll know by now I'm not a fan of the well ordered neat-and-tidy sort of garden and I don't cut things down until I have to, but there's been a few things I've been looking at since July and inwardly groaning. It's my first full year here and I'm still very much learning how to grow things on this soil (clay, not much sun - the total opposite to gardening on the chalk near Lewes.) Things really have taken off here, especially in what I call the sunny border (it's all relative.) The Diascia personata especially has formed a huge engulfing mass, obscuring several less vigorous plants that I hope will still be there when I come to cut the Diascia back (or remove most of it actually.) Salvia uliginosa, which I thought would stand up straight behind and amongst it has flopped over on top of it, and the Helianthus atrorubens, also included for the tall dark wiry stems I imagined would stand tall behind that, has also fallen forward over everything.  The problem is partly a red maple (bought as a standard tree some years back - it has never thrived), the fence behind and the path in front. Plants do not just passively fall over, they 'perceive' the path as an open space to grow into, and the tree and fence as shade and competition to grow away from. Hence they end up horizontal, getting trodden on. The mass of undergrowth was satisfying for a time - the Buddleia lindleyana held it's own well, the Eryngium giganteum elbowed its way up through the tangle, Gladiolus tristis shot up to 6ft high of so to get it's peculiar flowers into the light, like Diplodocus heads peering out of a thicket. But Rudbeckia maxima is under there somewhere, as are a couple of Dierama and two Decaisnea. I hope they'll recover. Kniphofia caulescens has definitely rotted off.

So anyway, perhaps you'll understand how, despite the fact that the Diascia and the Salvia are still blooming away, I'll be glad to get in there with the secateurs. The Diascia anyway I can honestly say I am thoroughly bored with. People always want to know about plants that just go on and on flowering all summer long, and if that's what you want I can heartily recommend it. You can have some of mine in fact (they're extremely easy from cuttings and totally hardy) but I'm sick of it. I like my season-long interest to come from the turn-over - things coming and going, changing places.

So that's one job. Whatever Diascia personata I keep will be further back, mixed in amongst everything else.

Then there's the huge Miscanthus in the middle of the border too. I can't wait for that to go over so I can have it out and do something better with that space. The maple will have to go too (it's had its chance) and the Lavatera Lilac Lady beside it. It's a good form - smaller that the commoner varieties and a nicer colour but not what I want now really. That'll leave a huge gap. I can't wait. Everything'll transpire a huge sigh of relief.

As for the rest of the garden - there's similar stories elsewhere. Mostly I'll leave the stems and old seed heads as long as I can - probably until January. I'll leave a stubble to discourage the dog from wandering about snapping off the new growths in spring. I'll make hazel 'bird-cages' for the Salvia and the Helianthus to grow through to support them through next summer. I've taken down the Bronze Fennel because I don't want too many of her offspring - lovely as she is.

People assume fallen leaves smother plants but except for small evergreens (lawns for example) that's rarely so, and the worms take them away and feed the soil in the process. People also like to cut things down as soon as possible after flowering - to get a second flush of flowers or make the plant put it's resources into the roots instead of the seed heads. I'm not sure either of these things make that much difference to most plants. I think it's more about neat and tidiness and I prefer the untidy textures and colours of autumn.

Which brings me back to my original point. When the dusty, listless scruffiness of August gave way to death's rich tapestry a couple of weeks back it was a release. Last 'summer' seemed interminable, but now, here we are, ready to move on again...