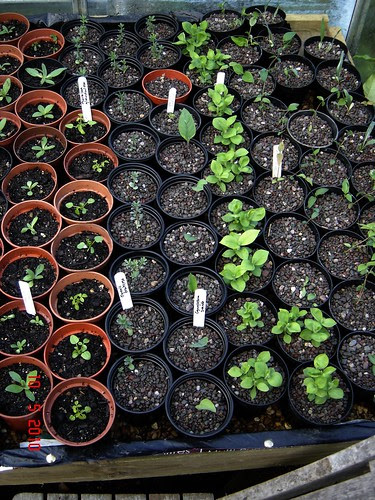 Happy potlings, originally uploaded by peganum.
Being somewhat new to this business, the novelty of having a greenhouse full of babies hasn't worn-off yet. It's extremely exciting.
Until last year I'd only raised a few items here and there for fun or if I needed something specific for a garden. I'd done some courses (one especially good one at Armidale tech, NSW) and paid close attention to what other nurseries did. I raised my plants as well as I could (and often ended up with a lot more than I knew what to do with) but I never really had to develop what you might call a production system before. It's what's known as a steep learning curve.

I'm obviously reluctant to give away trade secrets - a customer asked me recently where I got my seeds from and I said something vague about the internet, but the fact is that the internet has been absolutely indispensible, both for hunting out likely looking species that are not easily available over here in the UK, and for finding people to sell me the seeds. In the process I've also made a few friends.

So, what have I learned in the last twelve months?
Vigilance - that's one thing. Neighbours might have a spotted me in slippers, PJs and fleece, with a torch, prowling about out here, periodically dropping something on the path and squishing it into oblivion. I make no excuse for this. For whatever reason the local pest control team (hedgehogs, slow worms, toads) are not doing their job and I have to step in and thin the slimy hoard. It's become a nightly ritual although the period spent at said ritual has decreased lately as the new shoots firm up and the slugs amuse themselves elsewhere. 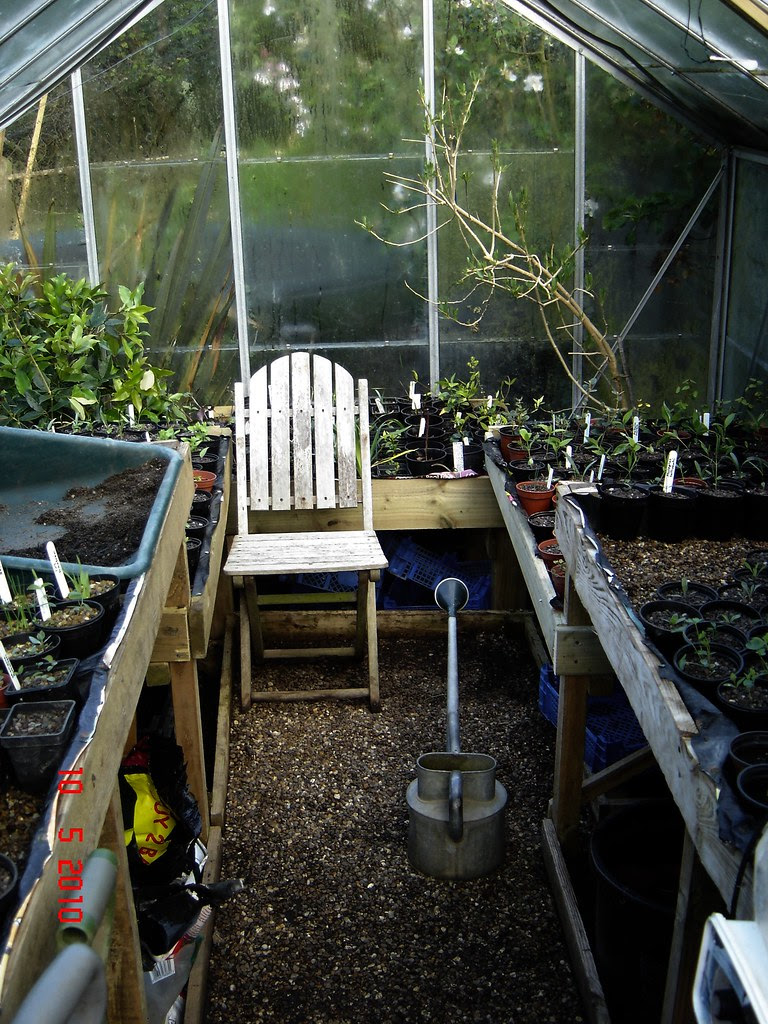 Making more space is the other thing. Not for nothing is this blog called Far Too Many Plants. I've no idea where I'm going to put it all. The original idea with the 12 x 8 greenhouse my wife very kindly bought me a few years back was to keep half with benches for growing my weird and rare plants, and half with borders filled with compost for growing tomatoes and basil and such like. That was before I decided to try to run a nursery. As a consequence, all last winter my newly potted cuttings sat in blue mushroom crates on top of the compost - horribly vulnerable and intolerably risky with freshly pricked seedlings. I just couldn't see the slugs coming at all. So this last couple of weeks I've been out with the timber and the hammer and the expletives, building new benches. It all looks very neat but I still don't know where I'm going to put everything...

What else? More sand in the compost (at least for young plants and dry climate plants) keeps it more open and drained for longer, and to try not to prick out more than one seedling per pot. This I have trouble with. I'm too soft. I hate throwing seedlings out when they've gone to all that trouble coming up for me and I've tended to put two or three in each pot (as insurance, in case one dies, ha ha.) You can do this with some species. The seedlings either coexist or there's a certain amount of 'self-thinning' as I believe the foresters call it, meaning that the weaker seedlings get out-competed by the stronger and disappear. In the worst case scenario though, all survive but none thrive. Stanleya pinnata and Penstemon palmeri I think suffered this way last year.

Another punishing winter took it's toll but much less so than last year. The greenhouse was minimally heated and fleeced (see article) so it didn't drop below -5C but limited space meant some relatively young plants had to sit outside. I chose only those that I believed to be fully hardy but, like I say, it's a steep learning curve. Plants aren't necessarily killed by the cold per se, but, if they're sick or weak for some reason (or too small), winter is when this'll catch up with them. All the Hibiscus made it through by the way, in their pots, out in all weathers, as did Senna hebecarpa - my most experimental new items. All the Desmodium and Asclepias, Colquhounia and Caryopteris divaricata made it. Those that didn't make it include Nepeta govaniana, Spigelia marilandica and Atropa belladonna. All sizable plants, and I'd have thought, pretty hardy. Strange.

Anyway, there's lots of exciting new things coming along.
As soon as they're ready you will, of course, be the first to know.

Happy Spring to all our customers.
Posted by Steve Law No comments: