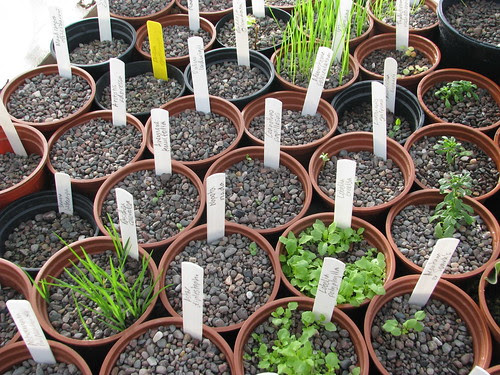 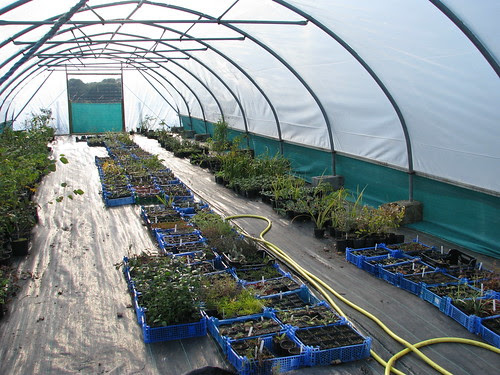 One might expect this to be the quiet season on a nursery but the mild weather (the mildest on record apparently) means that things are still growing and I've taken the executive decision of continuing to pot things on here and there. Autumn can be a time of prodigious root development in many species in a normal year so it's not as mad as it sounds. They've usually stopped by mid November though so this year is undoubtedly odd. I already have all sorts of seedlings up that I normally wouldn't expect to see until spring and I'll have to keep them cool and well-ventilated through the dark months if they're to survive.
Anything remotely tender of course should be left well alone now. It's important not to damage the roots in case they rot, or prune the tops too much in case they try to make new growth. The damp mild weather produces a lot of moulds and aphids so it's touch and go.
Plants from Mediterranean climates (Chile, California, western South Africa) are the exception. It's worth knowing which ones these are because Autumn to Spring (being mild and damp) is their main growing season in the wild so it's a good time to think about potting them on, or even pricking out seedlings. I have some pots of Chilean Lobelia excelsa and polyphylla seedlings which look very eager to get on with life. I'm not sure they'll look so happy if I wait until March but moving them now might be worse. It's a learning curve, as they say.

The other thing of course is getting the nursery itself set up to receive customers in the Spring. At the moment, apart from the polytunnel and the shed, it's something of a blank slate. At some point soon I'll be buying in a lot of timber to make display beds, and there'll be a shade house and an area with a pond liner for wetland plants. At the moment it's just a basketball pitch sized area covered in Mypex. I'm hoping for some inspiration for the design - something eye-catching but practical.
For now though I'm working on the shed, for which I've been making window frames - something the like of which I've never attempted before. Getting the corners square and strong has been something of a challenge, given that the shed itself isn't exactly square, but they do actually have glass in them now. I'm not planning on becoming a carpenter any time soon but it's been very satisfying.
Next I need to get some gates for the entrance, and a properly installed electricity supply (not just an extension lead strung across). Insurance too - that's a big one.

This is also the time of year for checking out the new catalogues. I shan't reveal my sources of course but going through the lists of the various seed merchants is always exciting and I always end up with longer wish-lists than I can possibly pay for or find space for (assuming they come up). Each year I buy in a few stock plants of things that are particularly uncommon from other UK nurseries but this is my first year importing plants from abroad, in this case from Japan. It's not cheap, what with all the official hoops they have to jump through (quite rightly) getting the certification, and a bit of a gamble, but if seed is not available it's the only way to get hold of some particularly special things. I shan't say any more for now but I must say I'm very excited about the package that should arrive in the post sometime in the next week or two.

I've been putting together my listing for the new Plantfinder. I've just checked and am very pleased to discover that I have no less than 186 new items to add to the existing 102, all but eleven available at less than twenty other nurseries (often a lot less) and nineteen previously unlisted in the Plantfinder. Many of these are still in 3in pots so I'd better stop faffing about and get on, hadn't I. 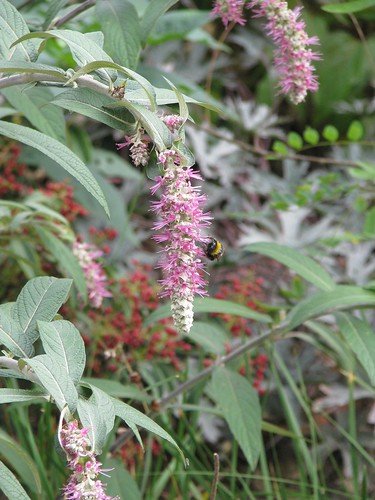 There's one to get your lallaker round, as my grandpa used to say (ie it's a tongue twister, for those of you that don't speak Olde Sussex).
This is definitely turning out to be one of my favourite plants. 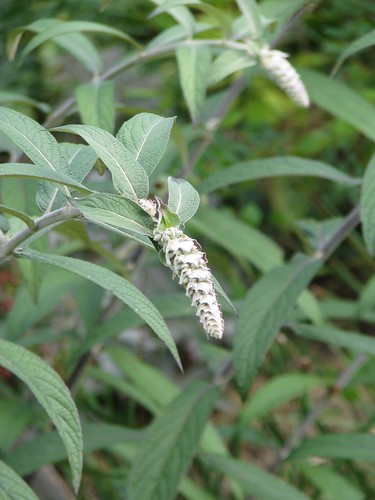 The whole thing has a most unusual pale/dark effect - restrained but very classy and unlike anything else. I cannot speak too highly of this plant.

To 4ft tall, and not shrubby, despite appearances, so don't worry when it disappears in winter. 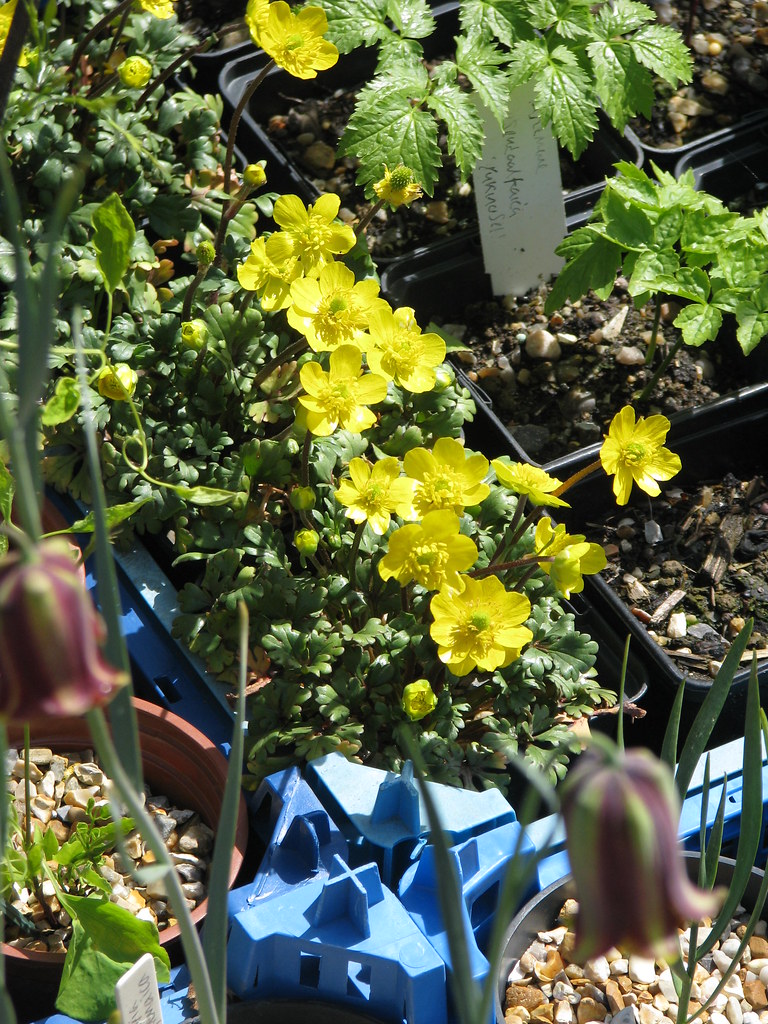 A miniature species from Southern Spain with glossy dark green palmate leaves - tinted black when young, red stems, and substantial fresh yellow flowers. It has tuberous Ficaria-type roots but without any invasive tendencies. 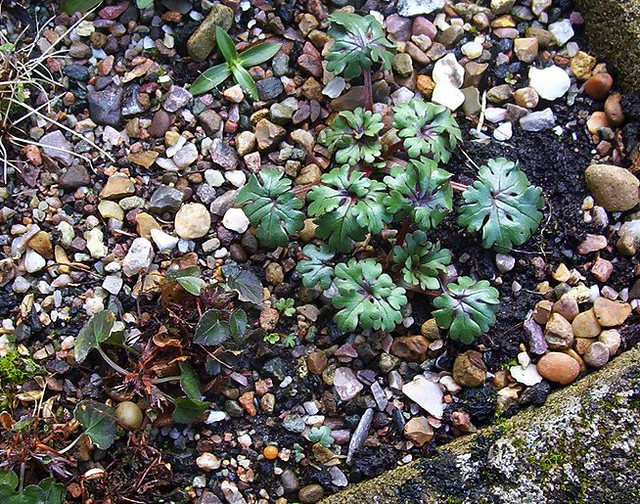 It appears in spring, flowers, and disappears again, and is therefore ideal for combining with other small Mediterranean bulbous and tuberous plants. An extremely neat and satisfying little buttercup for troughs and raised beds.
10cm pots ~ £6 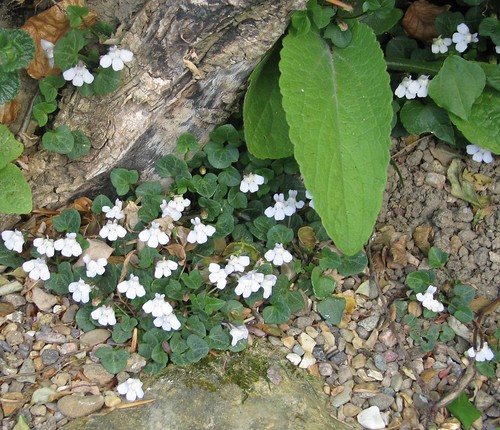 Cymbalaria hepaticifolia
Forget the common Ivy-leaf Toadflax that festoons shady walls in many parts of the country (pretty though that is) this is a much nicer species with delicate mauve white flowers and fleshy silver marked leaves and spreading without being invasive. Excellent in dry shade but best to avoid big vigorous neighbours. Good cover for hardy Cyclamen.
3in pots ~ £5 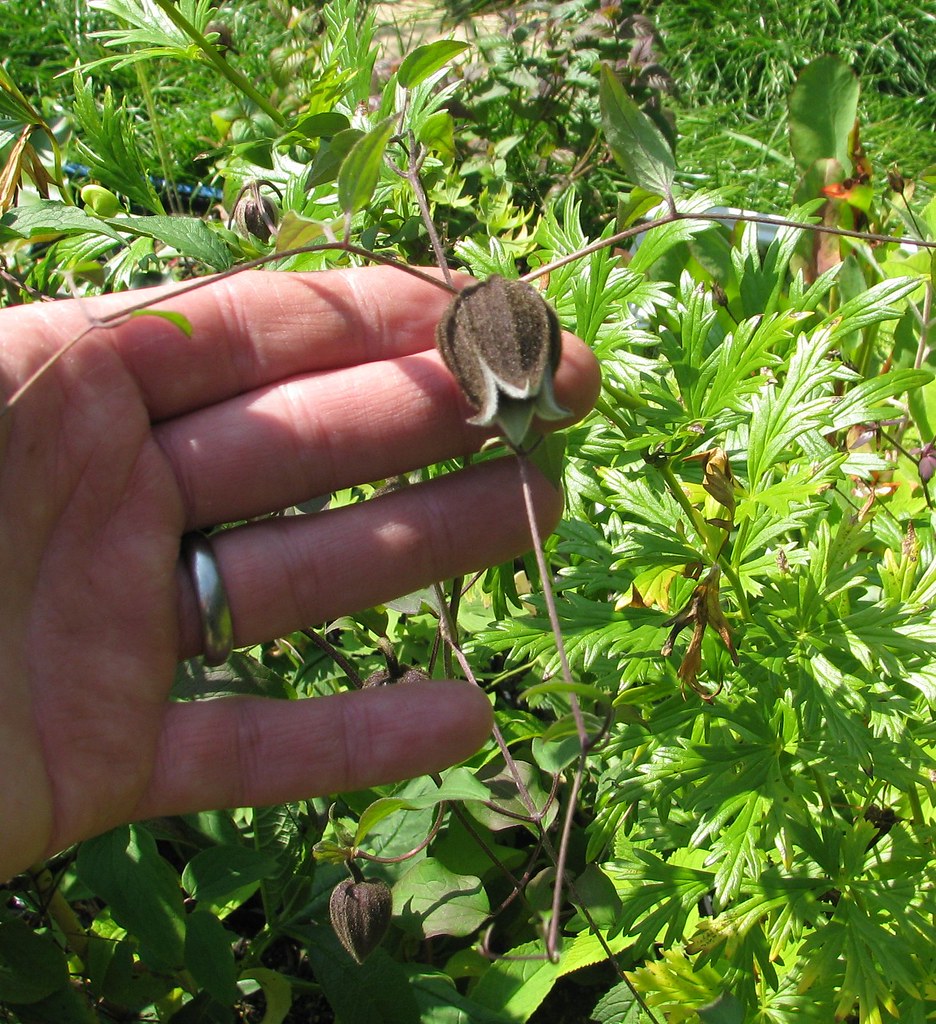 A really peculiar species with nodding urn-shaped flowers that look like they're made out of dark brown felt and with a silky white lining. Very odd.
This is a small scrambling herbaceous species growing to about 6ft so plant it among the shrubs near the path where you can get a proper look at it. 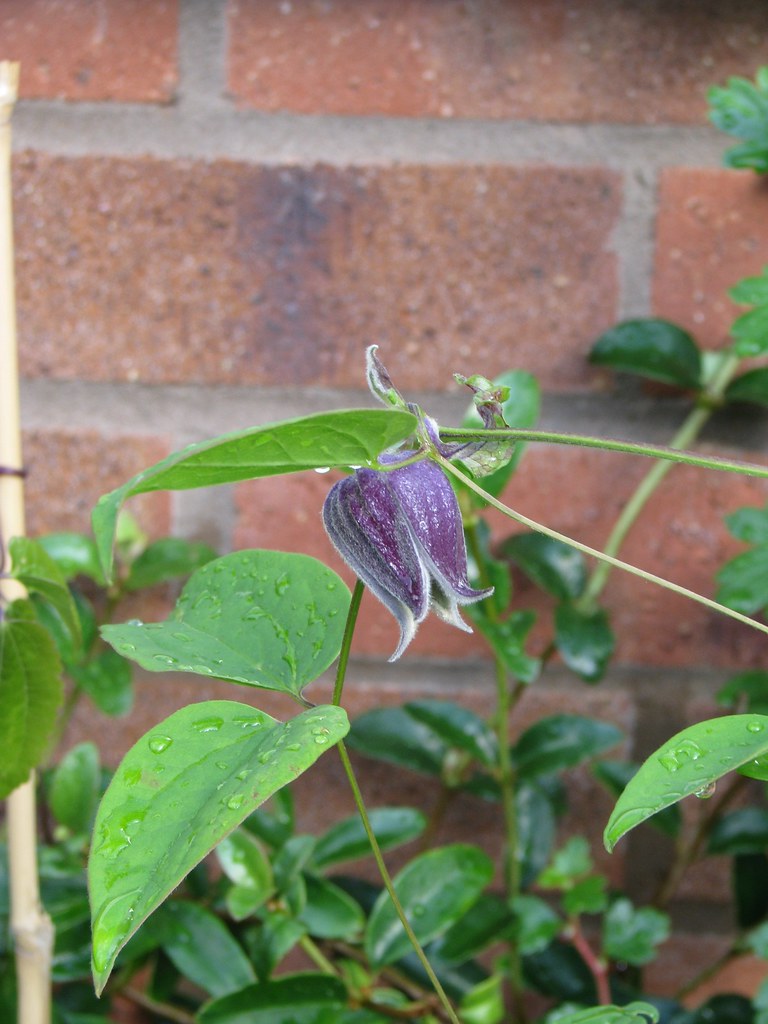 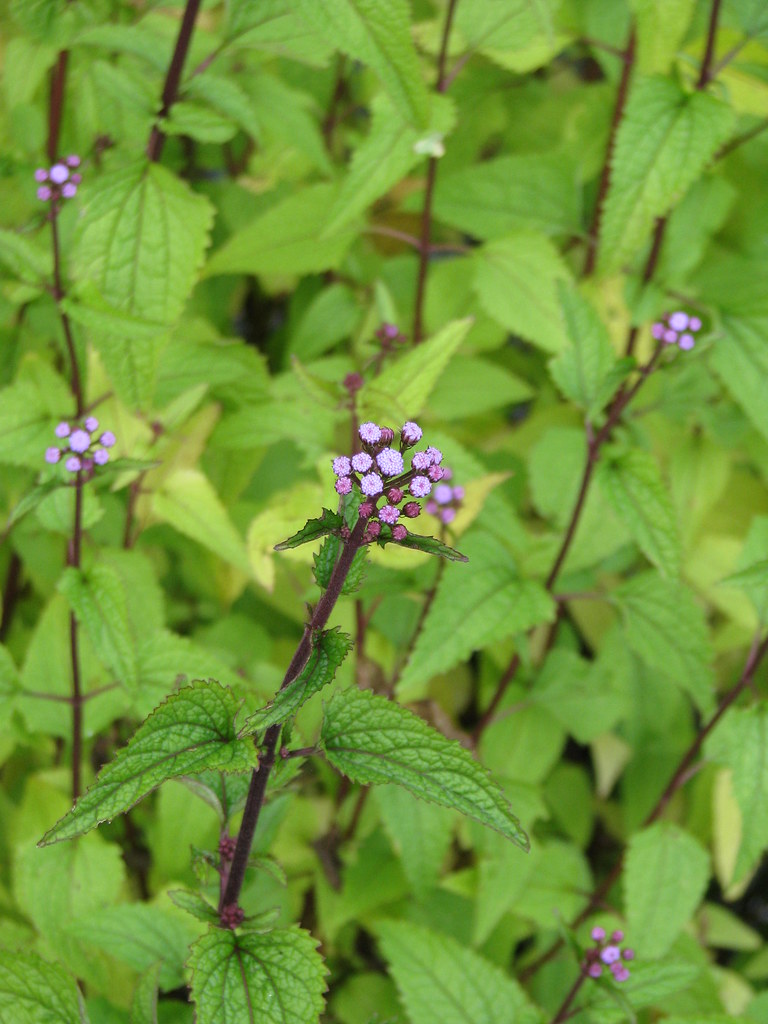 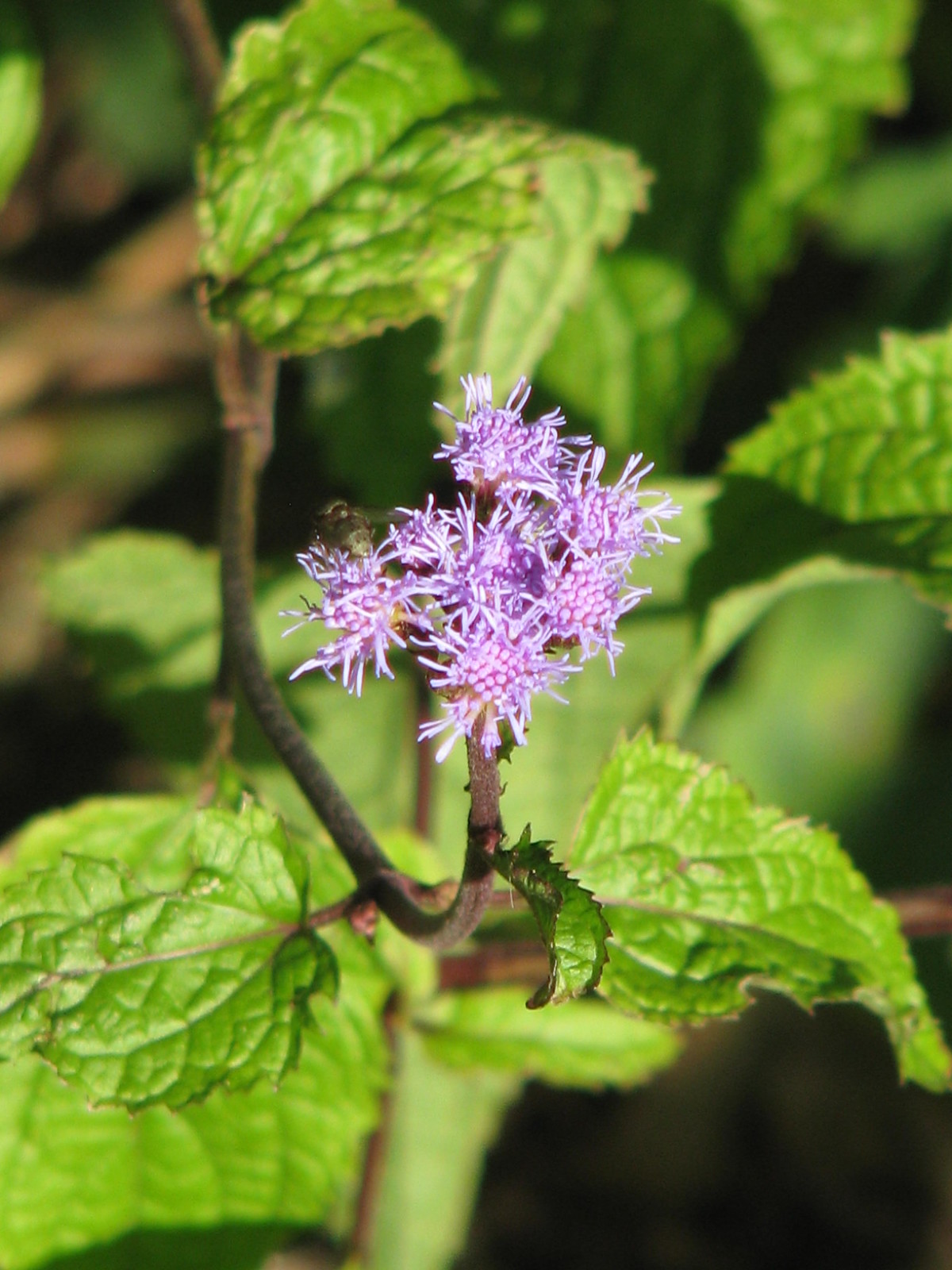 Best grown in a moist (or even wet) rich soil in full sun. Needs a long warm season to flower well but worth it for the very late display. To 18ins. Spreading but not invasive.
2L pots ~ £8 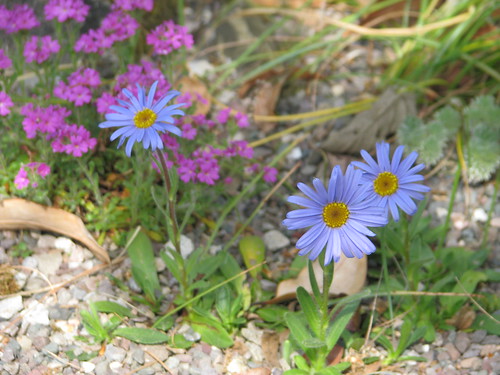 Felicia rosulata
As a normally very sensible friend recently commented on Flickr - these are indeed 'adorable'.
Previously known as Aster natalensis, these have proved easy to please in a sunny well drained spot, and although said to benefit from a dryish winter (coming from East Africa, this is to be expected) they have so far been better if not too parched. Completely unfazed by the last few winters' onslaught.
An easy alpine and should be better known.
1L pots ~ £6 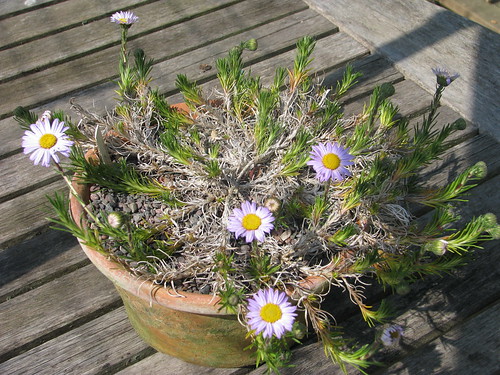 Very different - this is a creeping species with needle-like foliage and soft lavender daisy flowers. Just as hardy and easy to grow. Uliginosa means 'of wetland' or something like that, so probably best not too dry.
1L pots ~ £6 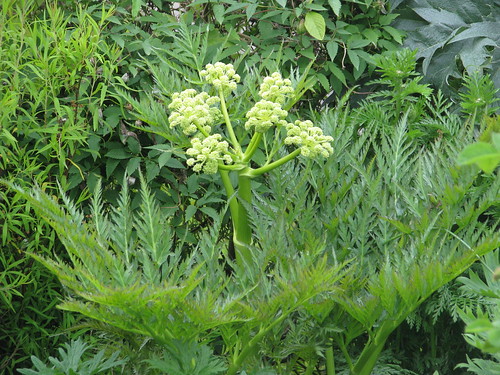 What a brilliant name!
A very good-looking medium sized umbellifer with jagged cut glossy green foliage and creamy umbells turning lime green - a very nice contrast. Absolutely not at all "yet another bloody hog-weed" and not even slightly coarse or invasive. 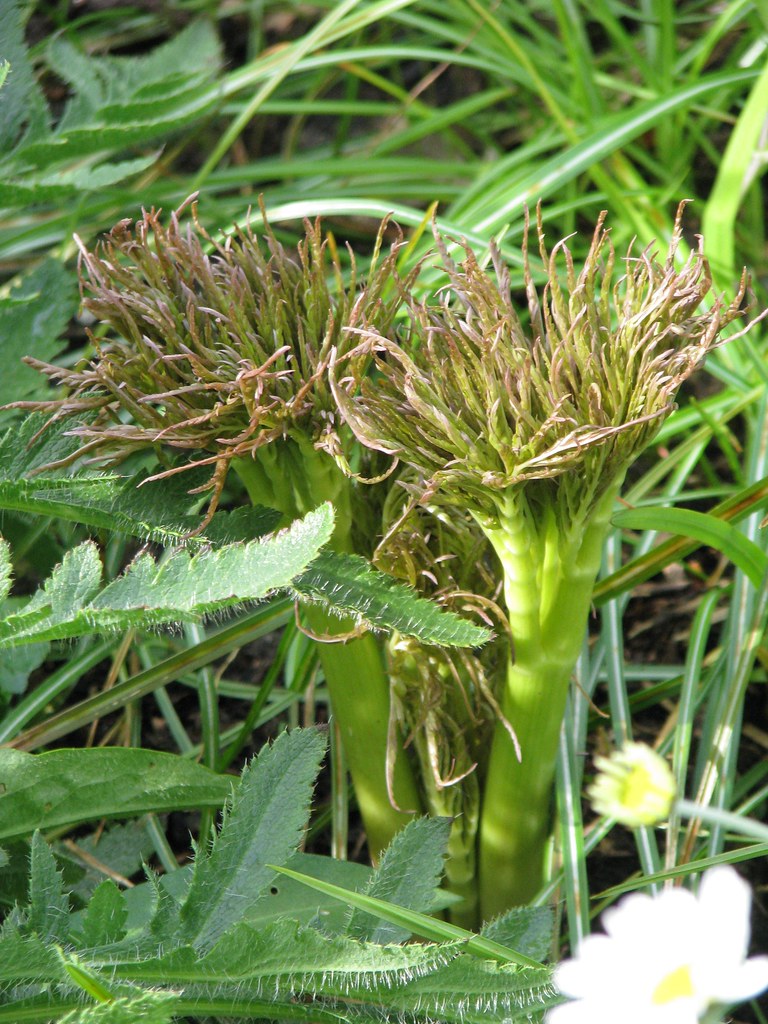 The new growth. To me this is one of those plants that is always worth looking at.
Although southern European in origin this plant is best kept not too hot or dry and does well in light woodland.
3L pots ~ £10