A couple of years back I was very excited to read the catalogue of a nursery called Koba Koba, based somewhere down in Devon. (I just checked - they've closed apparently.) I was excited because they were offering a substantial list of 'hardy' gingers and other 'hardy' subtropical plants such as Musa (bananas) and Amorphophallus (those extraordinary giant Arums that stink of rotting meat) and at the time I was very drawn to the whole 'hardy exotics'/'architectural plants' thing. The plants they offered had always interested me but like most gardeners in the UK, I'd thought of them only as specimens for tropical greenhouses and conservatories. A book on the subject (Hardy Gingers by T.M.E.Branney, Timber Press) came out and I duly obtained my copy.
I was aware that some genera in the family (Hedychium, Roscoea, Cautleya) included some good hardy species but was astounded by the variety of what I had previously considered truly tropical groups (Zingiber, Alpinia, Costus, Kaempferia and Curcuma for example) that could tolerate apparently much lower temperatures than we have experienced in this part of the world for many years (-12C for Alpinia zerumbet, -15C for Costus speciosus for example). I couldn't wait to try some.
What was not apparent until I got over my euphoria was that these temperatures are only tolerated if the roots are kept completely dry in the winter.
I'll let that sink in for a moment...
That's completely dry. In the winter... In the UK...
Clearly someone has a funny idea what 'hardy' means but I hesitate to say that they were deliberately misleading us in order to sell plants (or books) but I have a more interesting point to make here because this was the first time in my 20 years gardening career that I had genuinely understood the importance of climate in gardening beyond merely taking into account a plant's tolerance of cold.
What we perhaps forget, living in the UK where it seems to rain more or less equally all year round, is that in many parts of the world, and not just the tropics, there is a definite wet and dry season. We in Northern Europe actually live in a winter wet part of the world. It doesn't seem like it much of the time because Britain has a maritime climate (remember your high school geography) which is never dry for long, but travelling due east, across Europe and into Central Asia it becomes increasingly obvious how much of the year's rain (or snow) falls in the Autumn-Spring period, and, saving a few thunder storms, how little falls in the summer. The difference is striking even between Devon and Essex if you look at the statistics. The Mediterranean area is, as I understand it, just the southern limit of this temperate winter rainfall zone, where summer heat is high enough to cause enough evaporation to create a semi-desert environment. The amount of rainfall annually is not that different to northern Europe.
Similar environments (known as 'Mediterranean' for short) can be found wherever similar situations occur all over the world, where the temperate winter rainfall zone slips equatorwards along the west coast - in California, parts of northern Chile, the Western Cape of South Africa, and the southern corner of West Australia. These regions are unusually harsh environments - the hot and dry seasons coinciding means that most plants are active in the winter and dormant during the summer (spring bulbs for example.)
A lot of plants from these areas will not tolerate freezing (although a surprising number will - at least to -5C) but generally, 'Mediterranean' plants are relatively easy to grow in the UK because we have something like the same climate, with relatively dry summers. As long as the plants are grown in the sunniest spot available and the soil drains very freely they can be extraordinarily hardy. They're especially useful in situations that become completely parched in summer - on chalk and sand soils for example, and up against south and east-facing walls. They also tolerate the drying effects of hedge and tree roots as long as they will also tolerate some shade.

Not so for plants from summer rainfall areas. Mediterranean climate areas cover a very small part of the world but summer rainfall is normal over almost all of the rest of world's land surface. We are used to hearing about the hurricane season in the USA and the Monsoon in India or Thailand, but it's much the same throughout southern and eastern Asia, eastern and northern Australia, much of South America and almost all of Africa. The only exceptions are the equatorial tropics where the rain falls all year round and where the rainforest dominates (or used to) and the zones between the winter wet Mediterranean areas and the summer wet subtropical areas where almost no rain falls at all. This is where the major deserts form.

Much of this area is far too tropical to provide plants for our British gardens but where the summer rainfall zone slips polewards along the east coast it takes in parts of temperate Eastern Asia, south eastern Australia and New Zealand, a small part of south eastern Africa, parts of South America and a large slice of southern USA and Mexico. In these areas the winter temperatures can be similar to those we get here, but without the wet.
So were the 'hardy gingers' a bit of a scam? Well, maybe. But summer rainfall plants aren't as useless as you might think. Many of them come from remarkably cold parts of the world. The deserts of North America extend all the way into Canada and provide us with some incredibly frost tolerant cacti and Agave. Even plants from as far south as Arizona and New Mexico, Alabama and Georgia may suffer much harder winters than we do. Plants from Patagonia and parts of central China are in a similar position. The Eastern Australians and Africans are generally less frost tolerant but especially if they come from upland areas, they can be amazingly adaptable too. The Agapanthus, Kniphofia, Phygelius, Galtonia and Crocosmia we grow come from the highlands of east Africa. The area from southern Brazil to northern Argentina gives us many good garden Salvias (uliginosa, guaranitica, involucrata), Passiflora caerulea, Abutilon megapotamicum and Gunnera manicata. Australia is less generous but this may have more to do with the quality of the soil than the climate. I have kept Banksias, Correas, Lomatias and Grevilleas from New South Wales outdoors all year round in pots for the last fifteen years, and lost none except a Correa I planted out last year. The trick is to keep them as dry at the root as possible - it is commonly believed that any plant of doubtful hardiness will be better off in the ground as the soil will insulate the roots but this is not necessarily the case. Potted plants dry out quickly, especially if somewhat root bound. Thus it helps if your 'subtropical' plants are drought tolerant desert dwellers.

The problem then with the 'hardy gingers' mentioned above is that, during the growing season they are not at all drought tolerant. Alpinia, Costus and Curcuma are woodlanders and need moist, rich, even wet soil during the summer, as do the Amorphophallus. I can't think of any way of arranging the wet summer/dry winter regime these plants need in the open garden in the UK unless it's by lifting them in the winter and storing them like Dahlias (which are of course the classic winter rainfall plant). Not all plants put up with this sort of disturbance.

One final point I must add. Along with the wet summer many of these plants require, is a need for heat and light during the growing season that is often hard to provide in the UK. Plants from the southern states of the USA for example may experience freezes like nothing we see here, but the summers are long and hot and, in between storms, bright and sunny. An extraordinary plant like Hibiscus coccineus is totally frost hardy but may not come into growth early enough to flower before the autumn frosts cut it back down again. Some Hedychium have similar problems. If we want to grow these fabulous plants we may have to borrow some tricks from the vegetable growers - using black plastic to heat the soil up early for example. They'll need siting in the hottest possible situation and yet in a spot that is moist and fertile. A west facing wall may help.
On the other hand, in the deserts of Australia and Arizona for example, a bitterly cold winter night is typically followed by a bright dry winter day. A south or east facing wall or similar is our best hope for these plants.
Finally, woodlanders from the monsoon zones of southern and eastern Asia (Tricyrtis, Arisaema, Calanthe, Anemonopsis, Deinanthe, Asarum etc etc) do not tolerate the dry summers we have in eastern England at all well, exacerbated as it is by trees, sucking up every last drop of moisture. They will enjoy a dank north-facing exposure and a woodsy soil without nearby trees rooting into it.

Ok, that's more than enough for now. You will have noticed that I don't feel the need to write my blog in little twitterish 'sound-bites' as seems fashionable, and actually, I really like the old essay form, or a good solid article in a 'proper' journal. I hope you have the stamina and find it worthwhile.
Posted by Steve Law 3 comments: 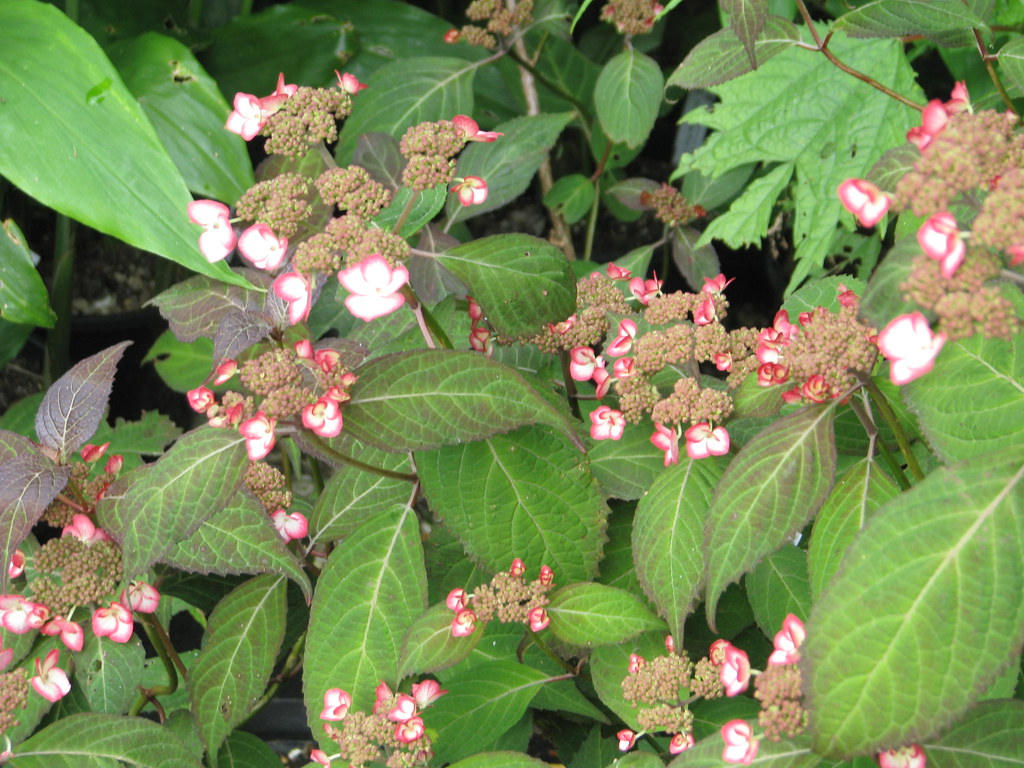 A typical lacecap Hydrangea in many ways but with two unusual features - the sterile florets around the edge of the inflorescence are white, edged with pink (but tastefully so), and the new foliage is a rich maroon red. 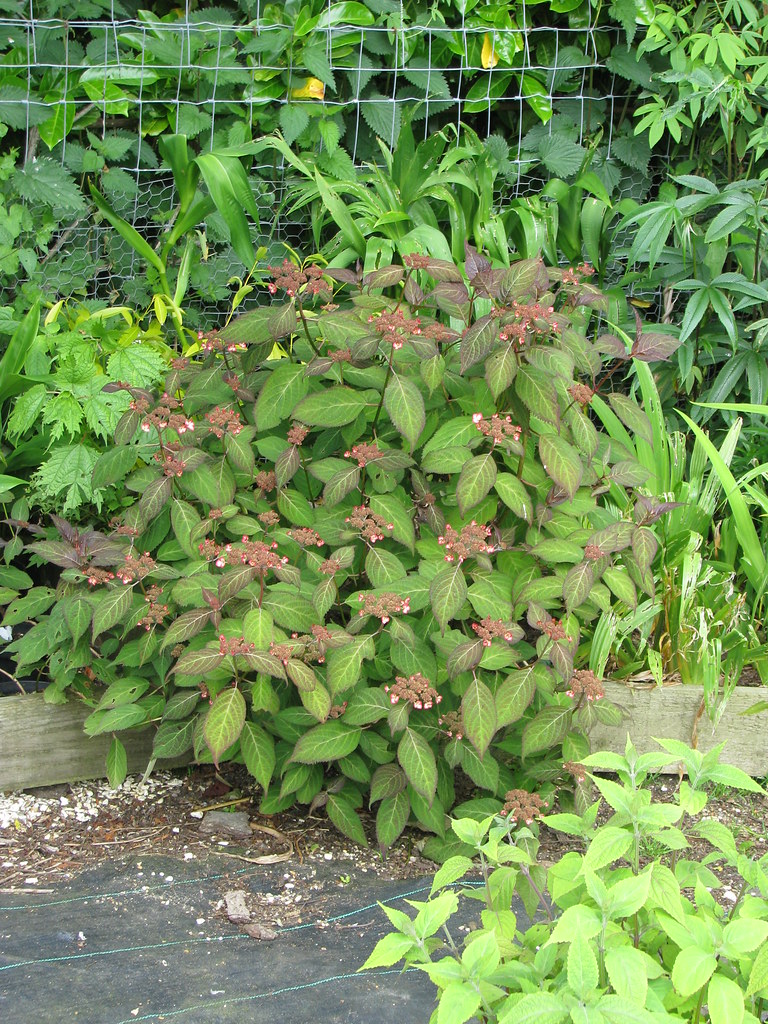 A striking small shrub (about 4ft high) for semi-shade on most soils as long as not too dry (including chalk. Hydrangeas are among those plants often believed to be lime-haters. This is not the case.)
2L pots ~ £9

Scientific names or not, as the case may be

I was thinking my blog list was looking a bit empty today (Hi Paul!) and so thought I'd have a look around at what sorts of things other gardener's blogs are on about. After a quick look, I've not come across anything like this one - most seem to be either about growing veg or conservation (and good for them). We're all about growing something unusual just for the sheer hell of it here. It doesn't have to be useful. It doesn't have to be especially rare. It just has to be something interesting that you don't see every day. Hopefully we'll fill a niche.

Now people's names - they are a problem...
Posted by Steve Law 3 comments: